Following a first summer of operations at London Gatwick, this week marked a significant milestone for BA Euroflyer as the airline, a wholly owned subsidiary of British Airways, received its Air Operat 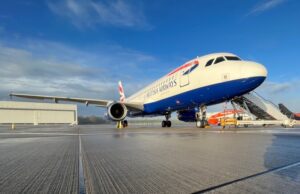 ers know and love. The issuance of an individual Air Operator’s Certificate and Operating Licence for BA Euroflyer enables the airline to begin the transition of aircraft, flight crew and cabin crew to the wholly owned subsidiary, which is based at London Gatwick.

Euroflyer on 29 March 2022, when the airline began operations under the British Airways Air Operator’s Certificate. The launch of BA Euroflyer marked the return of international short-haul flying from London Gatwick following the Covid-19 pandemic. This summer, customers flew to more than 30 destinations across the network – including Amsterdam, Santorini and Marrakech and hundreds of new flight crew, cabin crew and office-based colleagues have joined the BA Euroflyer team.

“Receiving the AOC is a momentous day in the BA Euroflyer journey and is testament to the hard work of the brilliant teams that have worked closely with the UK Civil Aviation Authority on the AOC and Operating Licence applications, whilst also managing the ramp-up of a start-up airline during its first summer of operations”.

Over the next six months, ten Airbus A320s and nine A321s will be gradually transitioned across from British Airways to BA Euroflyer with one A320, registration G-GATL, recently joining the BA Euroflyer fleet. Flight crew and cabin crew will attend an Operator’s Conversion Course, obtaining a formal licence to specifically operate BA Euroflyer aircraft.

Customers flying on the airline’s new subsidiary at London Gatwick receive the same premium service as on mainline British Airways flights as well as enjoying the benefits of travelling with the UK’s flag carrier including a generous baggage allowance, free water and snacks, free seat selection at -24 hours and frequent flyer benefits which include lounge access. Customers flying in Club Europe (business class) enjoy a premium check-in area, lounge access and a complimentary gourmet meal and bar service on board.

BA Euroflyer plans to operate from London Gatwick to more than 30 destinations in Summer 2023 including Bari, Dubrovnik and Seville. Flights priced from £39pp each way are on sale now.